I was going to an event recently and there was a food theme to it.  I had to do some research and a friend gave me a great recipe for a Pakistan Black Chick Pea Salad, known there as Chaat (which also refers to many snacks).  Check out the Wikipedia info on it.  I’d had a bite of this salad from my friends’ fridge the weekend before and it was delicious so I had to get the recipe.  It was awesome to get this and translate it because it came from his mom so he was getting the true, true specs while speaking to her in Urdu and bringing it to me while applying some of the thoughts they have in the Middle East that they still use while cooking here to preserve the food.  I have brought it down to simple stuff (only took a couple things out).

Go to a local Indian Store to get (two cups of dry) black chick peas. Rinse several times and then soak in a bowl of water overnight.  In the morning, boil until they are the desired consistency and chewiness (about 1.5 hours in boiling water is needed after an overnight soak).  If there is a time element, use regular Garbanzo beans/chick peas from a can in place of the black chick peas. 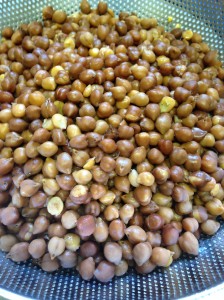 While the boiling is taking place…

Bake potato (I nuked it for a couple minutes) and chop into small pieces.

Get out a second bowl and add the chick peas (once done), tomato, avocado, lemon juice, chopped cilantro. Mix together (hands work well to do this). Add the potato.

Mix the second mixture with the first mixture and adjust salt, pepper, red pepper, to taste and add lemon juice. 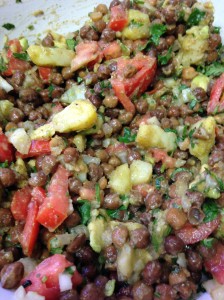 This salad was awesome!  It can be enjoyed warm or cold, I prefer the latter.  So fresh and so many flavors.  Would be great for tailgaiting!!!

It’s summer, which means it’s melon time!  Bon Appetit came a couple weeks ago and I was flipping through it, of course, and there was a recipe with honeydew.  I haven’t seen many recipes with honeydew in them.  The most I’ve ever done with it is either (1) cut and eat or (2) the aforementioned topped with prosciutto.  So, this recipe was game!  This delectable food-bearing treat I keep mentioning is Shaved Honeydew, Fennel, and Olive Salad.  The last two key ingredient are some of my favorite foods!  It’s a no-cook (in the sense of no heat) recipe which is great this time of year.  And, gluten free, dairy free and vegetarian.

Zest the orange (and then make sure you don’t add this to the dressing!!!).  I carefully took it out of the bowl after I more carefully read the directions.  Why should you read ahead, right?

Shave the honeydew…hmmm….what’s the best way to take the skin off the melon?  Carrot peeler, not that great, knife ended up being the best bet.  Then I quartered the melon and it took awhile.

Next, you do the same thing to the fennel.  Much easier to prep/cut!

Add melon, shaved fennel,  and olives to vinaigrette and toss to coat. Top salad with orange zest and fennel fronds, drizzle with more oil, and season with salt and pepper.

It was very light and refreshing, though it seems like it was missing something and I can’t tell if it was lemon juice or S&P.  I did add more S&P at the table so don’t know if it was the lemon.  But overall, very nice.  Perfect for summer!  Was served with scallops and some delicious grains.  Would highly recommend it.