Was in Vik for two nights and had the choice of pretty much two restaurants. Might as well cover the territory. So the 2nd night checked out Strondin Bistro & Bar. 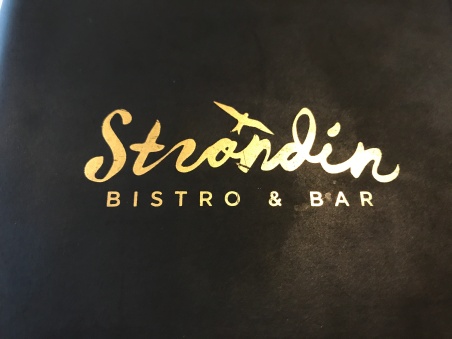 A good amount to pick from on the menu but soup was something I really wanted because by Day 3 of the trip I felt like we’d have about a week of rain. Lamb is not a meat I truly have a taste for but that was the only thing I could pick from because the other soup/stew was diary based. So I went for the:

It was quite good. The taste in the lamb was very subtle. And the rest of the ingredients were potatoes, onions, carrots that were very nice. The warmth brought it all together. 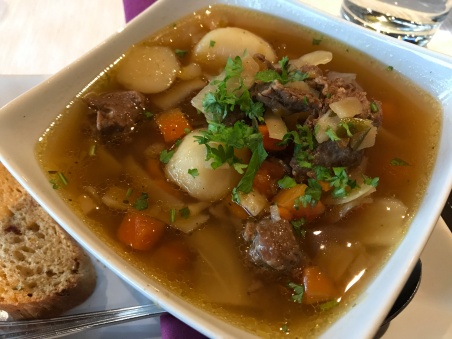 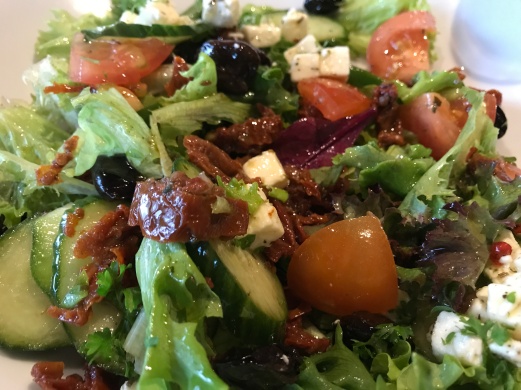 That had to be one of the best salads I’ve ever had. Ignoring the lack of veggies the prior few days, the unique combo of sun-dried and ‘regular’ tomatoes in the salad and the dressing it had; SO good!

They also had some delicious bread with some kind of herbs in it to make all this even better, that was just brought to the table. 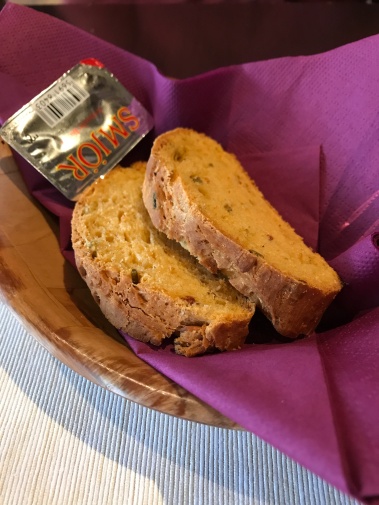 Finally, was enjoying all this with a glass of Cabernet Sauvignon, Maronde Pionero from Chile, 1,250 kr. Wine was pricey as usual, but at least since I live in the DC-area, it wasn’t total sticker-shock.

What also makes a dinner amazing is the staff. A bit shout out to Antonio, Jan and Lammi. They provided great service, making this dinner even better. Thanks!! So, when you’re in Vik, check this place out.

Also, this yellow object started coming out in the sky when we walked out of the restaurant, it was tough to identify. But it provided us this scenery.

Moving across the country in Iceland meant new hotel, new happy hour. Wow, this hotel in Vik actually had a 3-hour Happy Hour – 4pm-7pm. We could stay out late doing tourist stuff!

The two brews on tap we sampled in Vik were Viking Lager and Einstök Pale Ale.

Viking Lager, per the site: The most popular draught beer in Iceland for some years, it is pleasantly mild with a slightly sweet flavour. Less filling and more refreshing than many other beers, it’s ideal for those who prefer a medium-strength beer with less bitterness. Tasting notes: Light golden, little sweetness, light, limited bitterness, corn, beans. ABV 4.5%.

My notes: A bit on the light side, nonetheless good. I like my beer to have a bit more body.

Einstök Pale Ale, per the site: Brewed 60 miles south of the Arctic Circle, we balance three kinds of hops with pure Icelandic water to create an ale unlike any other. It can only be described as an Arctic Pale Ale and it’s truly one of a kind. Cascade hops give it American character, while Northern Brewer and Hallertau Tradition add just enough bitterness to make this ale refreshingly Icelandic – and to make everything else pale in comparison. Key Ingredients: Pale ale malt, crystal malt, chocolate malt, American and Bavarian hops.  ABV 5.6%

My notes: Good crisp beer, not hoppy, good body and color, perfect to drink after a day on the road.

And, since these were both enjoyed at happy hour, bargain price at 50% off bringing them to about $8/pint. Cheers!

As my trip in Iceland continued, I drove further east and arrived in Vik. 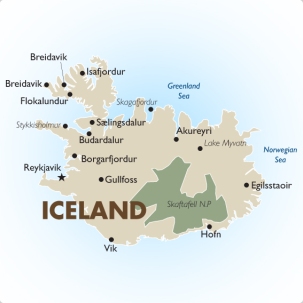 It’s a small town and there are about two restaurants. So on night one, dinner was at the restaurant in the hotel, Berg. Per the website, “in Icelandic, Berg means “mountain,” a word that not only symbolizes the powerful forces from which this rugged island-nation was formed but, the also the sentiment their beauty inspires. Creativity and inspiration are what drive our chefs, who invite you to sample our delicious Icelandic cuisine made with the freshest local ingredients.”

While browsing through the menu, the taste of the house came out with bread, salmon on cukes and butter with some type of herb. 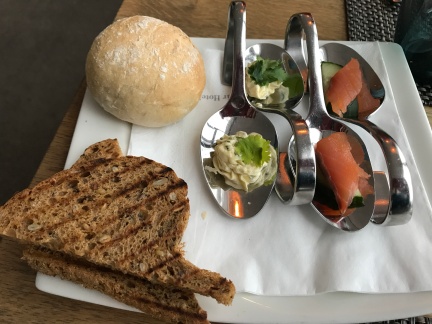 After looking over the menu, meal choices ended up being:

Tiger Shrimps (yes the plural version) in a mango and chili sauce with coconut rice. kr 2,490. Good taste and amazingly coconut-y rice! A bit heavy on the sauce.

Marinated Chicken Leg with potato dippers and salad with green pesto and garlic skyr (which was on the side) kr. 3,900  A nice salad on the side. One of us had mozzarella balls, the other skipped them.

Dinner was very nice, and very plentiful. And just had to go back upstairs after finishing.  No long trek ‘home’.

Also, had I mentioned it rained a lot in Iceland? View from hotel room.