Moving across the country in Iceland meant new hotel, new happy hour. Wow, this hotel in Vik actually had a 3-hour Happy Hour – 4pm-7pm. We could stay out late doing tourist stuff!

The two brews on tap we sampled in Vik were Viking Lager and Einstök Pale Ale. 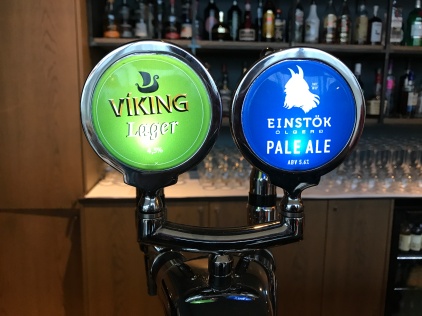 Viking Lager, per the site: The most popular draught beer in Iceland for some years, it is pleasantly mild with a slightly sweet flavour. Less filling and more refreshing than many other beers, it’s ideal for those who prefer a medium-strength beer with less bitterness. Tasting notes: Light golden, little sweetness, light, limited bitterness, corn, beans. ABV 4.5%.

My notes: A bit on the light side, nonetheless good. I like my beer to have a bit more body.

Einstök Pale Ale, per the site: Brewed 60 miles south of the Arctic Circle, we balance three kinds of hops with pure Icelandic water to create an ale unlike any other. It can only be described as an Arctic Pale Ale and it’s truly one of a kind. Cascade hops give it American character, while Northern Brewer and Hallertau Tradition add just enough bitterness to make this ale refreshingly Icelandic – and to make everything else pale in comparison. Key Ingredients: Pale ale malt, crystal malt, chocolate malt, American and Bavarian hops.  ABV 5.6%

My notes: Good crisp beer, not hoppy, good body and color, perfect to drink after a day on the road.

And, since these were both enjoyed at happy hour, bargain price at 50% off bringing them to about $8/pint. Cheers! 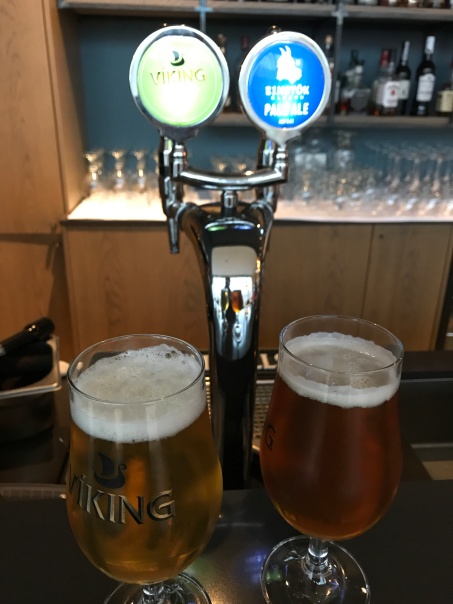