We traveled just north of Port Douglas, AUS to visit Cooya Beach (Kuyu Kuyu). This is a traditional fishing ground of the Kuku Yalanji people.  We were taken out by the Kubirri Warra brothers for a walk on their beach, mudflat and mangroves and introduced to traditional fishing and gathering techniques, and we got to find our own tucker (aka food).

So, we walked out in the water (pants up to knees and barefoot from their house — no shoes allowed) with sticks in hand and started working for crabs.  The past few years in MD crabs have been expensive.  Yes, frustrating.  But our guides were telling that around that area the prices is around at least $200/bushel.  Ok, at the end of our half hour ‘fishing’ trip, I see why.  You walk around with a sharp edged stick in hand and look for crabs and stab them.  That’s about it.  Talk about labor hours! I was lucky enough to get one.  And getting that one (key number)…once I saw it and it didn’t scurry away, it probably took me about 5 minutes to stab it.  Dang! 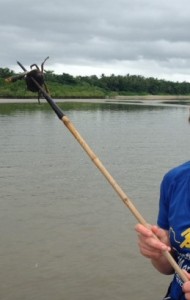 After we were done ‘crabbing’ we continued, but it was through a bit different areas.  This is where oysters and escargots live.  We found many of them.  I don’t like raw oysters but when it Rome… These were pretty good.  Because of the salt water they are in, it seeps into them.  They were very (good &) salty.  And the salt crystals on them were darn good, too.  We also found many of the escargots. 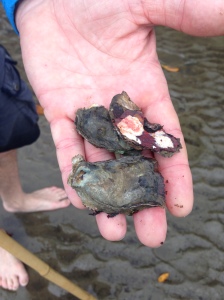 When we returned to the starting point, our guides cooked all of this up for us and we had a small feast.  Great local findings. 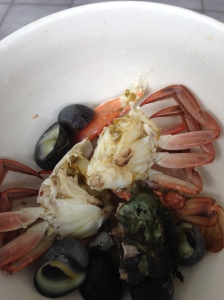