I love seafood, I love smoked seafood. So on my weekly or bi-weekly trip to Trader Joe’s I of course swung by the demo station. Had a bite of what they were serving (I think it was a egg salad). And at the station, they had a stack of Smoked Trout. While I have had their (and others’) vacuum packed/sealed stuff, this one was canned. Think of a sardine can, with a pull-top lid. It’s farm raised (not my favorite), skinless and in canola oil.

So I grabbed some and used it on a salad.  Simple arugula, tomatoes, kalamatas, hearts of palm and baby Brussels sprouts. Just delicious blend of flavors. So as long as you’re not totally against the farm-raised, this is great stuff to have on hand. Stack it in the cupboard with the tuna and the other stuff and you’re good to go.

I love seafood, I love cilantro, I love avocados, I love olives.  What does one do when they all come together?  Melt, find their happy place, eat way too much and then just share — oh not the food, just the recipe.
I found this Ceviche Verde Recipe in Bon Appetit several years ago and just can’t get enough of it.  It’s almost a Green Staple to me. So many things in it that I just love.  When halibut is sort of affordable (Costco, I love you) it’s amazing, but using another, affordable fish is just as good.  It might not look super eye appealing but it is appealing to the taste buds!

Dice avocados; add to bowl along with green olives, tomatillos, onion, cilantro, and jalapeño Add olive oil and season to taste with salt.

Serve over tostadas or with tortilla chips for dipping.

Visited Seasons 52, in North Bethesda, MD.  They have locations across the country, as well.  Their name stems from the (four) seasons in the year, and the 52 weeks that comprise it.  The menu is very seasonal, so if you go often, you better not have a favorite.  And they use this theme so everything can be very fresh.

Since it’s fall, squash and pumpkin is everywhere.  They even had it in the bar.  I went with a Pumpkin Pisco Sour, Crop Organic Pumpkin Vodka, Pisco, Aromatic Bitters.  Tell you what, pretty good. 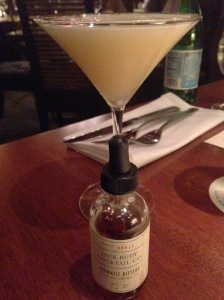 Took awhile to choose the main course, so my friends and I decided to split a flat bread.  The one with the goat cheese caught my eye since I can eat that stuff.  I’ll always give it a chance since many goat cheeses are now made less goat-y, as in a bit harder than they used to be.  So we went for the Artichoke & Laura Chenel Goat Cheese with leaf spinach, balsamic onions, roasted peppers.  Was a very nice start to the meal.

Then main course selection became harder, because of my lactose intolerance.  Many of the dishes had some form of dairy (from cow) and normally it can be eliminated. But when I asked the waiter he said it would be tough.  It wasn’t that easy to find something I could eat, which was surprising with the type of restaurant it is.  Fresh, seasonal.  He then mentioned they have a ‘special’ menu for those with allergies, intolerances, etc.  The menu was cut more than 1/2.  Then when ordering you had to be sure to ask for the elimination of specific ingredients in dishes.  This is an extreme case, but if I ordered mac & cheese, I would need to be sure to ask for it without the cheese and milk.  Some weren’t that bad, but some were complex.

I was a bit disappointed.  I ended up ordering the Asian-Glazed Chilean Sea Bass from the lactose-free menu – Organic black rice, snow peas, shiitake mushrooms, micro wasabi **request without brown butter sherry vinaigrette (wouldn’t that be the glaze? — as I had no glaze on mine). 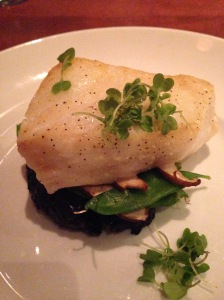 Overall the whole dinner was good, I was just a bit disappointed with the overall feel of the menu.  The service was also very slow.  Took over 20 minutes to get drinks and then a glass of wine.  But, was there with friends to catch up so it wasn’t that bad.