Last night there was a call from Down Under to taste their wine.  One must answer!  How can you go wrong?  It was taking place at Bin 201 in Annapolis, MD.  For $10 you taste(d) 8 wines and then you could apply those 10 bucks towards the purchase of a bottle.  And, if more than one person goes, you can combine your ‘credits.’  The two of us who went walked out with a ‘free’ bottle of wine.  Score!  They also serve cheese and crackers at the tasting.

So the night began: 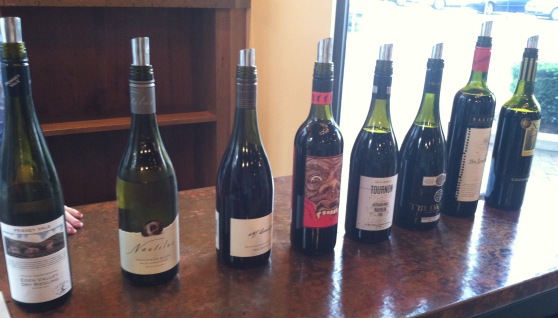 #1:  Pewsey Vale Riesling.  That was originally to be the 2nd in the tasting but turned out to be best as first as some previous tasters decided the notes made it best to go first.  Nice and dry.  You’re not drinking sugar.  The nose was flowery, the taste was lime. 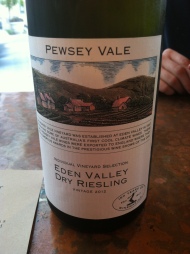 #2:  Nautilus Sauvignon Blanc.  Hand me the green peppers.  Or, if your recipe calls for some and you’re out, you could easily sip some of this instead.  Wow, very poignant, yet nice, nose and taste of them.  Also had some grapefruit notes.

#3:  Mt. Beautiful Pinot Noir.  Yes, it’s from New Zealand but they are pretty close together, yet so far away from here.  There was a light note of cranberries in the nose.   For taste, I found some ash and bit of cranberry. 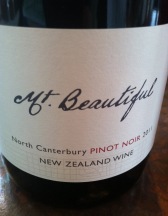 #4:  Misfit Brujeria.  I felt it was ‘thick and chewy’ and couldn’t pick up a flavor.  If I had to put something to it, the most I could say is chocolate, but that’s me. 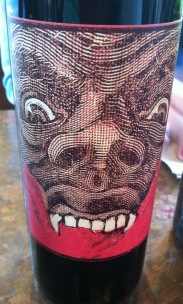 #5:  Tournon Mathilda.  Light wine with some eucalyptus on the nose.  Also carried the eucalyptus in the taste with a hint of jam. 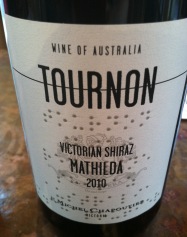 #6:  Tir Na N’og ‘Old Vines’ Grenache.   What a nose — chocolate and molasses.  Then it was like drinking molasses cookies with a hint of black licorice. 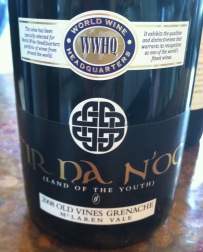 #7:  Yalumba “The Scribbler” Shiraz/Cabernet.  I love their Shiraz/Viognier blend so was excited about this.  I could not pick up a taste from it though, unfortunately.

#8:  Jim Barry “The Cover Drive” Cabernet Sauvignon.  The most I can give is mint! 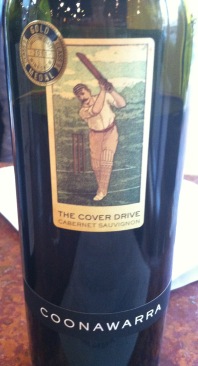 And the entire menu/notes from Bin 201 were interesting.  I always try to sniff and taste before reading these to avoid the ‘brainwash.’  The Aussie tasting was great and can’t wait to see/taste what’s next. 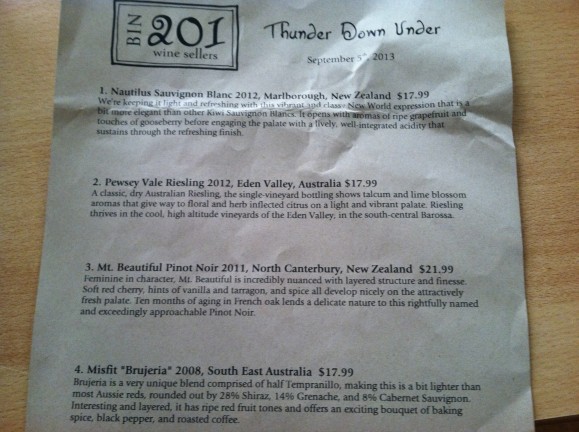 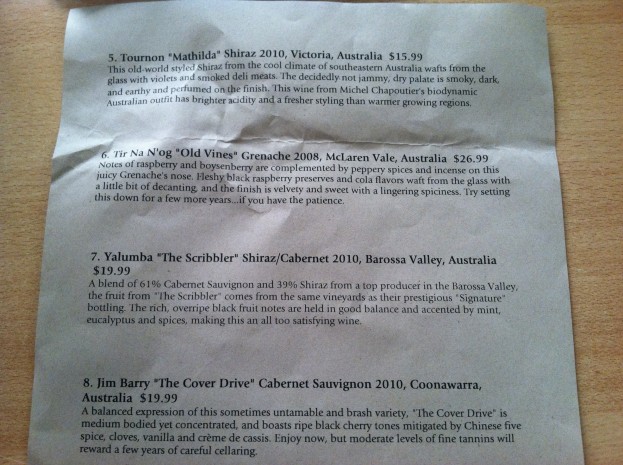 One thought on “Aussie Wine Tasting”