There is a nice wine-oriented restaurant in DC, Proof. Had been there a few times and opted to check it out again after going to the theater to see Nutcracker for the first time. 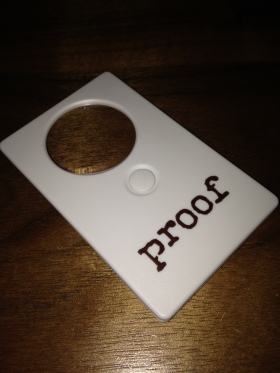 Started at the bar because my friends and I arrived before our reservation. We all enjoy wine, so we were inquiring quite a bit about several of the wines they offered. The bartenders didn’t particularly want to help us more than where the wines were from and the varietals. For a wine restaurant, it was surprising. We had to order it on a whim and hope it was good. It was fine, but nothing I’ll order again, or remember. I didn’t even remember to take a picture…

We sat down at the table and it was extremely dark. The picture above is a flashlight you can use to read the menu. It’s both a flashlight and magnifying glass. The print is very small on the menu. I have really good vision and was having problems. The waiter said that is the tone/ambiance they want to set — darkness, it’s a better mood.

Once we were able to read some of the menu, our not-so-helpful waiter (in addition to the start with the bartenders) came and explained some of the specials. We also let him know about dietary restrictions. My friend is allergic to shellfish and nuts, as well as being lactose intolerant like me.

We decided to get some side dishes as appetizers and went with:

-Brussels Sprouts, Kimchee Mayo & Vietnamese Dressing
-Fried Cauliflower with Lemon, Tahini, Garlic & Mint (didn’t get a picture since because of the nearly non-existent lighting, it was tough to get decent shots) 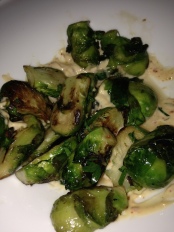 After spending awhile looking over the entire menu we were finally able to choose what we wanted.

I opted for the Scallops a la Michel Richard: crispy brussels sprouts, apples, confit leeks, basil & vincotto. I asked if there was dairy in this and the waiter gasped and asked how could there not be and why would I make an alteration? I wasn’t sure and just needed it because of being lactose intolerant. He was flabbergasted that I didn’t know who Michel Richard was. Sorry. So, he said would check with the kitchen but didn’t think it would be possible to alter such a well known chef’s original recipe. Long story short, he said they would make and exception for me.

My friends ordered the Pekin Duck: käsespätzle, red cabbage, duck confit, horseradish, green apple, concord grape sauce. They made sure there was no dairy in there for her, and she was safe because there was also no fish on there, or no crazy fish ingredient in any of the sauces. 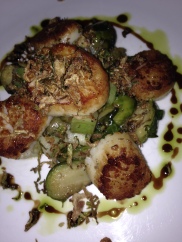 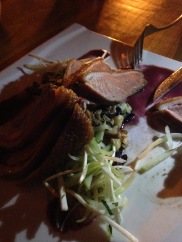 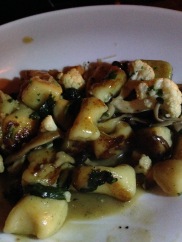 While we were waiting for the food, we asked for the sommelier. He came over and was a bit more helpful and gave some interesting comments about the restaurant and how it’s changed. He’d only been there a few months and once we started talking to him more he got much friendlier. The nicest service we had all night.  He did suggest another wine after taking into account our likes in wine.

The food was good. Overpriced, but at least decent in taste. The evening at least ended well when our waiter was kind enough to confirm my friend’s initial thoughts — Cal Ripken was sitting at the table behind us. My friends, who are huge baseball fans, got up after dinner to ask for his autograph to give to their grandma for Christmas. She’s a long time Orioles fan. Can’t go wrong with that.